This is part of a series on user success stories that showcase applications and accomplishments using HyPhoon datasets. Send us your story!

The Accomplishment: Dr. Yann Morel derived bathymetry and water column corrected reflectance for Heron Reef using his Self-calibrated Supervised Spectral Shallow-sea Modeler (4SM). Output includes water depth, as shown below, and water column corrected reflectance at the seafloor. Both products are being added to the Heron Reef dataset, and will soon be available for the community to download. 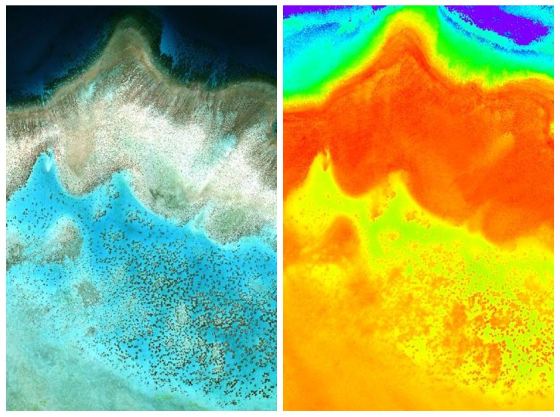 Data: The source data used for this success story was the 2002 CASI hyperspectral imagery from the Heron Reef dataset provided courtesy of the Center for Spatial Environmental Research at the University of Queensland. Heron Reef is located at the southern end of the Great Barrier Reef in Australia. The imagery has 1 m pixels and a spectral range from 400-800 nm with 19 spectral bands.

4SM Overview: The 4SM model is based on established physical principles of shallow water optics, operates without need for field data or atmospheric correction, and works with both multispectral and hyperspectral imagery. The model assumes both water and atmospheric conditions are uniform throughout the given scene, requires the presence of both deep water and bare land pixels, and is most applicable to clear shallow water at 0-30 meters depth.

At its core, 4SM utilizes a variant of Lyzenga’s method to calculate the slopes for all bi-dimensional band pairs, which are then used to interpolate diffuse attenuation coefficients for all visible bands. Surface glint is minimized using information from a NIR or SWIR band, bare land pixels are used to derive the slope of the soil line and the water volume reflectance, and deep water pixels are used to approximate deep water radiance. All of this information is then combined to drive an optimization approach for estimating water depth.

Output ultimately includes both water depth and water column corrected reflectance, which can both be used for further habitat and geomorphic analyses.

For more on 4SM: http://www.watercolumncorrection.com/ 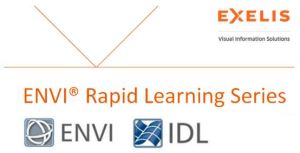 Have you downloaded, or upgraded to, the latest version of ENVI? Are you just learning the new interface, or already a seasoned expert? No matter your experience level, if you’re an ENVI user then it’s worth viewing the ENVI Rapid Learning Series.

This series is a collection of short 30-minute webinars that address different technical aspects and application tips for using ENVI. Originally hosted live in the fall of 2013, the webinars are now available online to view at your convenience: 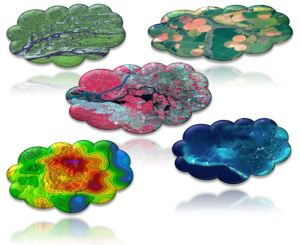 A popular topic these days is cloud computing. And the world of remote sensing is no exception. New developments in software, hardware, and connectivity are offering innovative options for performing remote sensing image analysis and visualization tasks in the cloud.

One example of the recent advance in cloud computing capabilities for geospatial scientists is the development of the ENVI Services Engine by Exelis Visual Information Solutions (Exelis VIS). Using what was previously the domain of desktop computing – this software engine brings the image analysis tools of ENVI into the cloud. This translates into an ability to deploy ENVI processing tools, such as image classification, anomaly detection and change detection, into an online environment. Additionally, because the system uses a HTTP REST interface and was constructed utilizing open source standards, implementing the software is feasible across a variety of operating systems and different hardware devices.

This flexibility of the ENVI Services Engine, and cloud computing in general, speaks directly to the “bring your own device” movement. Rather than being limited to certain operating systems or certain types of hardware, users have many more options to satisfy their preferences. Access and processing thus becomes feasible from a variety of tablets, mobile phones and laptops, in addition to the usual array of desktops and workstations.

As an example, consider the ability to access imagery and derived data layers from your favorite mobile device. Now consider being able to adjust your analysis on-the-fly from this same device based on observations while in the field. With the image processing being tasks handled on remote servers, extensive computing capacity is no longer required on your local device. This enables not just remote access to image processing, but also the ability for on-demand visualization and display of entire databases full of different images and results.

Having the image processing tasks performed on the same servers, or on servers closer to, where the imagery is stored is also more computationally efficient, since imagery does not need to be first transferred to local computers and results then transferred back to the servers. This is particularly relevant for large data archives, where even simple changes to existing algorithms, or the addition of new algorithms, may necessitate re-processing vast volumes of data.

Although the concept of cloud computing is not new, it has become apparent that the software and hardware landscape has evolved, making cloud computing for geospatial analysis significantly more attractive than ever before.

Attendees of the VISualize conference earlier this year received a sneak-peek at the ENVI Services Engine. The software was also recently on display at the GEOINT conference this past October. However, official release of the software isn’t scheduled until early 2013. For more information: http://www.exelisvis.com/

HySpeed Computing looks at the technology behind GPU computing.

Geospatial technology and imagery are now pervasive in our society. From the GPS device on your car’s dashboard and your local weather report to national maps of drought conditions and global analysis of the earth’s environment, geospatial data is playing an increasingly central role in our lives. As the importance and availability of geospatial data continues to grow, so too does the need to process greater volumes of data at faster rates to provide output in a timely manner. The result is an accompanying need for increased utilization of high-performance computing to meet these processing demands, an area where GPU computing is certain to play a significant role.

So you have some data – in fact you have a hard-drive filled to its storage capacity with more imagery than your computer can seemingly process in a year – and you can’t wait that long to get results. Let’s look at some example software options of how you can start using GPU computing to accelerate your image processing workflow.

One option is to utilize commercial software packages that inherently employ GPU processing as part of their architecture. For example, in the field of graphic design, Adobe Photoshop versions CS4 and later use GPU computing to speedup certain functions. An equivalent in the geospatial field is the GXL GeoImaging Accelerator (PCI Geomatics), which provides GPU-enabled acceleration for applications such as orthorectification, image mosaic creation, and pan-sharpening. However, widespread integration of GPU capabilities in commercial geospatial software is not yet fully realized, and thus many algorithms and processing options still await acceleration.

As an alternative, users can select to employ a high-level programming language to generate their own applications. For example, GPULib (Tech-X) provides a library of GPU-accelerated IDL functions that can be used to customize ENVI (Exelis VIS). Note that IDL is the language on which ENVI is built and also the foundation for developers to create custom modules that integrate directly with ENVI. Similarly, the Parallel Computing Toolbox (Mathworks), as well as Jacket (AccelerEyes), can be used to speedup MATLAB code. Although not explicitly considered a geospatial software tool, MATLAB (MathWorks) has extensive capabilities in scientific computing, including modules designed specifically for image processing and mapping.

For the experienced programmer, there is the option to go directly to the source and develop specialized software using one of the two dominant parallel computing architectures available for GPU development: CUDA and OpenCL. CUDA was developed by NVIDIA explicitly for leveraging the compute capabilities of NVIDIA GPU cards, whereas OpenCL is an open framework that can be used for both NVIDIA and AMD GPUs. Both are excellent choices for developing custom GPU software, but both also require a reasonable level of comfort with programming as well as an understanding of GPU nuances to get the most out of the acceleration potential.

Essentially, we’re still at the growth end of the GPU curve, but the field is progressing rapidly and GPU computing is quickly gaining momentum. It is going to be exciting to see how this field evolves.

Dr. James Goodman participated in the ENVI 5.0 Beta Program, and is now providing a look at the latest offering from Exelis Visual Information Solutions.

In early May, Exelis VIS announced its latest release – ENVI 5.0. Many years in the making, ENVI 5.0 provides a new look and expanded functionalities over previous versions of the popular remote sensing software. Let’s take a look.

The most apparent difference comes when you launch the new software. The interface has been completely redesigned. No longer do you see the menu bar and floating three-window image interface, but now everything is contained in a single window. The top of the window provides access to commonly used functions, such as zoom, stretch and pan, via icons and slider bars. The left of the main window displays the Layer Manager, which is similar to working with layers in ArcGIS, allowing you to easily open multiple views, stack layers in views, and turn layer displays on and off. The right side of the window contains the Toolbox, which is an expandable/collapsible directory of all the functions that were previously contained in the classic menu bar. And finally, there is the large center display of the window, which can be used to display up to 16 different independent views.

The question is: What’s under the hood? Aside from the interface, what are the improvements that can make a difference in the way you work with imagery? ENVI 5.0 now uses raster pyramids to enable significantly faster image display, particularly useful when working with large images. The pyramids are built the first time the image is opened, and from then on the pyramid files are accessed each time the image is re-opened. Additional improvements have been added to accelerate vector display, add interactive navigation tools such as pan, fly and zoom, and incorporate interactive enhancements such as brightness, contrast and stretch. The software also now harnesses the functionality of the ESRI Projection Engine to directly reproject georeferenced images. The end result of these improvements is that ENVI 5.0 provides many new additions to enable users to more efficiently visualize and analyze imagery.

Having trouble finding your way around the new interface? The folks at Exelis VIS have created a new set of tutorials to walk you through the process of getting re-oriented. Still not comfortable with the new interface, then rest assured you can still launch the three-window “ENVI Classic” (instructions are provided under ENVI Help Article 5421). But there are lots of advantages to working with the new interface. It’s definitely worth exploring. 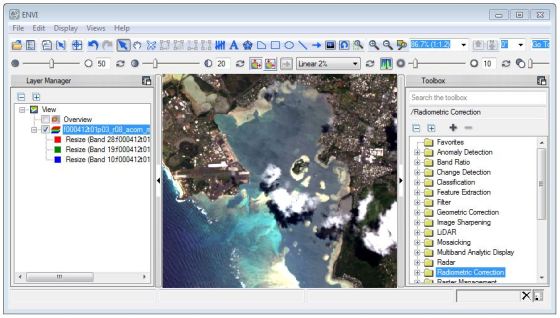 Screenshot of the new ENVI 5.0 interface.

Sell your own applications in our App Market